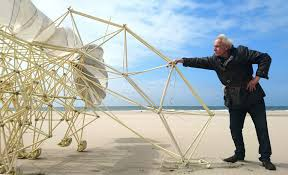 Theo Jansen, creator next to God.

Since 1990, artist Theo Jansen has been constructing ‘beach animals’ from ordinary PVC tubes. These animals are therefore not made of protein like the existing forms of life, but of another primal material: electricity tubes made of PVC. Over the years the animals seem to become more intelligent: they move on wind energy, can store the wind in plastic bottles and even get out of their feet when they, literally, feel wet. Theo Jansen does not wonder whether his work is art, science or philosophy. In his ‘fantastic PVC universe’ he simply duplicates creation. He does this on the basis of reproduction and selection, but without thinking too much of the existing nature. The evolution of the beach animals extends over many generations until they learned to better survive the storms and the water of the sea. Eventually, Theo Jansen wants to release these animals in herds on the beaches. By re-creating in this way, he hopes to become wiser about the existing nature: you meet the same problems as the real creator. In his books, Theo Jansen recounts his experiences as God. It is not easy to be God, you have to deal with many disappointments. But the few times that something works, you are delighted as God. He wrote down almost all his findings (dream, hope, disappointments…etc.) in his books in which he has made something of a biology book by describing all species, evolutionary stages, and a pedigree. The genesis of the animals is a continuous story on the right pages, while the left pages are filled with drawings, photo material, and columns that he wrote for de Volkskrant. Theo Jansen was elected artist of the year 2018 on the occasion of his ‘Strand Beasts’.